Take on our castles by storm !

Home » I discover » Cultural and historical heritage » Take on our castles by storm !
Add to favorites

The towering castles and magnificent châteaux of Auvergne

Where past meets the present

Come with us on a journey back in time to explore the incredible castles and châteaux of Terra Volcana ! Some – like Tournoël Castle in Volvic – were built in  the Middle Ages. Others – such as the Château de Portabéraud in Mozac and the Château d’Effiat – came along later. But all of them have a fascinating history and heritage, and tantalising tales to tell ! We take you on a whistle stop tour through history, starting with the last royal estate to be built in France, nestling in the very heart of Limagne.

Have you always wanted to witness what life is like in a château? In Auvergne, at Randan royal estate you go back in time to the middle of the 19th century. Experience the daily life of one of Europe’s richest family in its days, la Famille d’Orléans, who lived in the château from 1821 onwards.

Completely refurbished by Adelaïde d’Orléans, sister of Louis Philippe, the last king of France, Randan royal estate is one of the best examples of Romantic architecture in the country. Before it was devastated by fire in 1925, Randan was famous throughout the land for its splendour, with a neo-classical chapel, an orangery inspired by Versailles, gardens with a host of influences and more.

Today, you can explore the remains of this château and see inside the chapel, whose superb stained-glass windows have been fully restored. You also get to see the impressive kitchens of the Family d’Orléans, surmounted by a vast roof terrace which forms a walkway from the château to the chapel.

Wander, too, along the peaceful avenues of the former estate grounds and soak up the enchanting surroundings of the gardens created for King Louis Philippe. Along the way, information boards placed along the 3km trail you follow tell you all secrets of this vast 19th century landscaped creation. 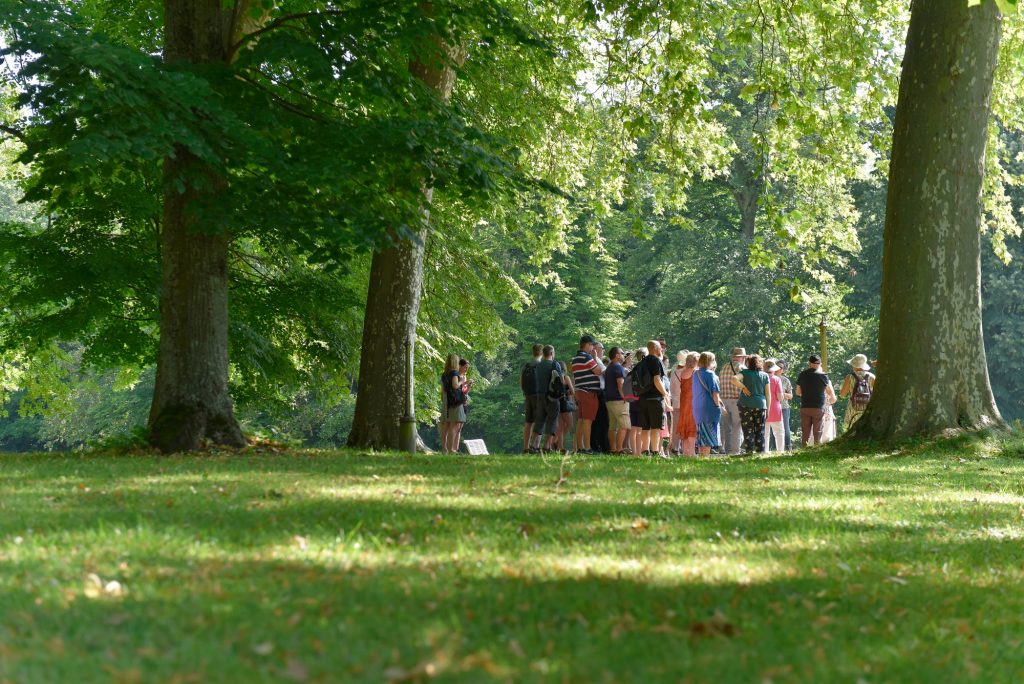 Did you know? Every year the Amis du Domaine royal de Randan association organises Randanplants, an event that celebrates the summer opening of the estate.
Devoted to all things garden landscaping and decoration, Randanplants is a tremendous opportunity to see another side of the château grounds.
The association also organises lots of other events at different times of the year. View all the association’s activities here.

When the Royal estate caught fire, much of the château’s contents were saved, including furniture, works of art, pianos, the ceremonial dinner service, horse-drawn carriages and family souvenirs. The surviving collection is incredible, giving you a peek into what day to day life was like for the Orléans in their family home, a place so full of history.

The other treasure of Randan Royal estate is the Hunting Museum, an insight into the life of Ferdinand d’Orléans, nephew of Madame Adelaïde and the last Duke of Montpensier.
The Duke was a hunting and travel fanatic, bringing back 450 animals from his expeditions around the world. He had them all stuffed by the British taxidermist Rowland Ward, who set them in realistic looking dioramas.
The resulting outstanding collection is unrivalled anywhere in Europe and of interest to casual sightseers and budding scientists alike.
Can you pick out the lynx, albatross and sea eagle?
And are you brave enough to look the Asian tiger in the eye?

Delve deep into history at the Château d’Effiat 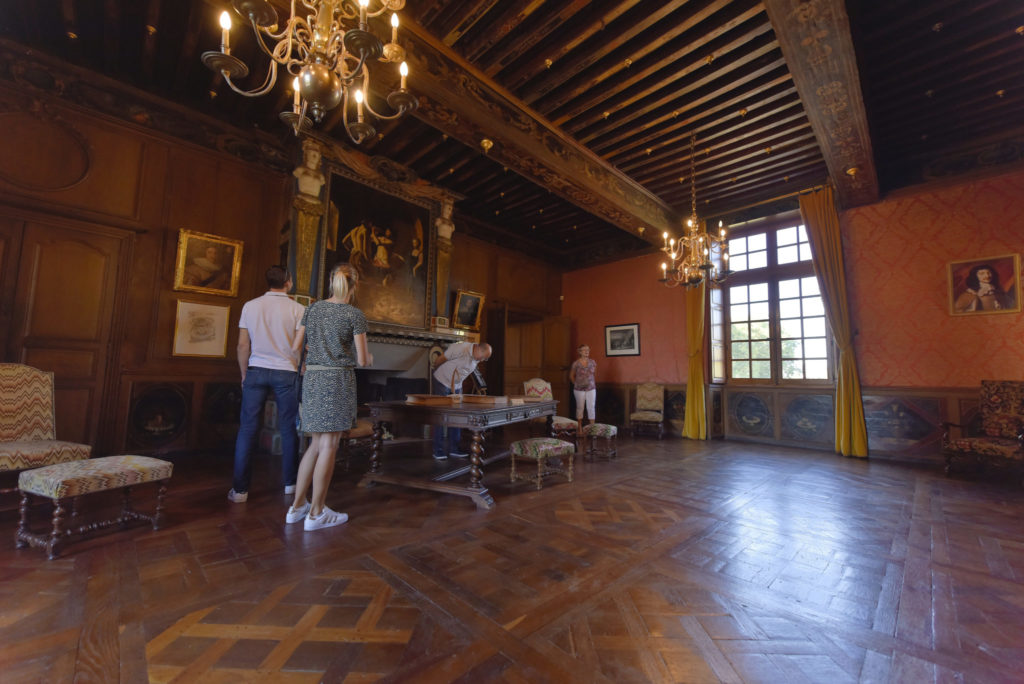 If your favorite historical period is the 17th century, then you can’t afford to miss the Château d’Effiat not far from Aigueperse, the residence of Marshal Antoine Coiffier-Ruzé, friend of the Cardinal Richelieu and adviser to King Louis XIII.

Cross the drawbridge, push open the imposing Volvic stone gates, enter the main courtyard and step into the incredible home of Marshal d’Effiat in all its 17th and 18th century splendour.
Inside, you’ll find sumptuous furniture, Italian-Renaissance-style painted panelling, frescoes, French-style ceilings, parchments bearing Louis XIII’s signature, a painting by Le Nain, and more… And you will also learn about the life of the Marquis of Cinq-Mars, the Marshall’s son, in a series of stained-glass windows dating from the Romantic period.

You can then go to explore the 120 hectares of gardens designed by André Mollet, patron of Le Nôtre. Don’t miss the remarkable nymphaeum in the château grounds.

In the period leading up to the French Revolution in 1789 the estate wals also home to the “École Royale militaire d’Effiat”.  Probably the school’s most famous pupil was General Desaix, who would go on to play a key role in the Revolution as one of Napoleon Bonaparte’s right hand men ! If you want to learn more about this fascinating auvergnat general, head for ther Royal Military School Museum – and also take a trip to the Manoir de Veygoux, his childhood home.

Various exhibitions are held throughout the year in the château grounds. Admission is free, giving you a chance to see works by a number of local artists.

Eccentricity on show at Portabéraud

Your next stop is Mozac, to see the Château de Portabéraud, a folly dating from the Age of Enlightenment, at a time when castles had started to evolve beyond their purely defensive purpose.

In 1790, the château owner, the town’s first mayor, Gabriel Mercier, decided to turn his home into a character property with a more decorative look, and the château came to be known as the “Mercier Folly”.

The Château de Portabéraud was ground-breaking in its day and is a fascinating place to visit. You’ll also enjoy a relaxed stroll around the country gardens.
The house has a very particular atmosphere that makes you want to let go and daydream, without a care in the world.
The château interior displays all the artistic eccentricity of its day, giving it a joyful, festive ambiance.
Throughout the summer there are family treasure hunt events in the grounds of this Auvergne château with a fascinating past, a great way for the kids to learn a bit of history while having fun !

A must : the delightful Château de Denone 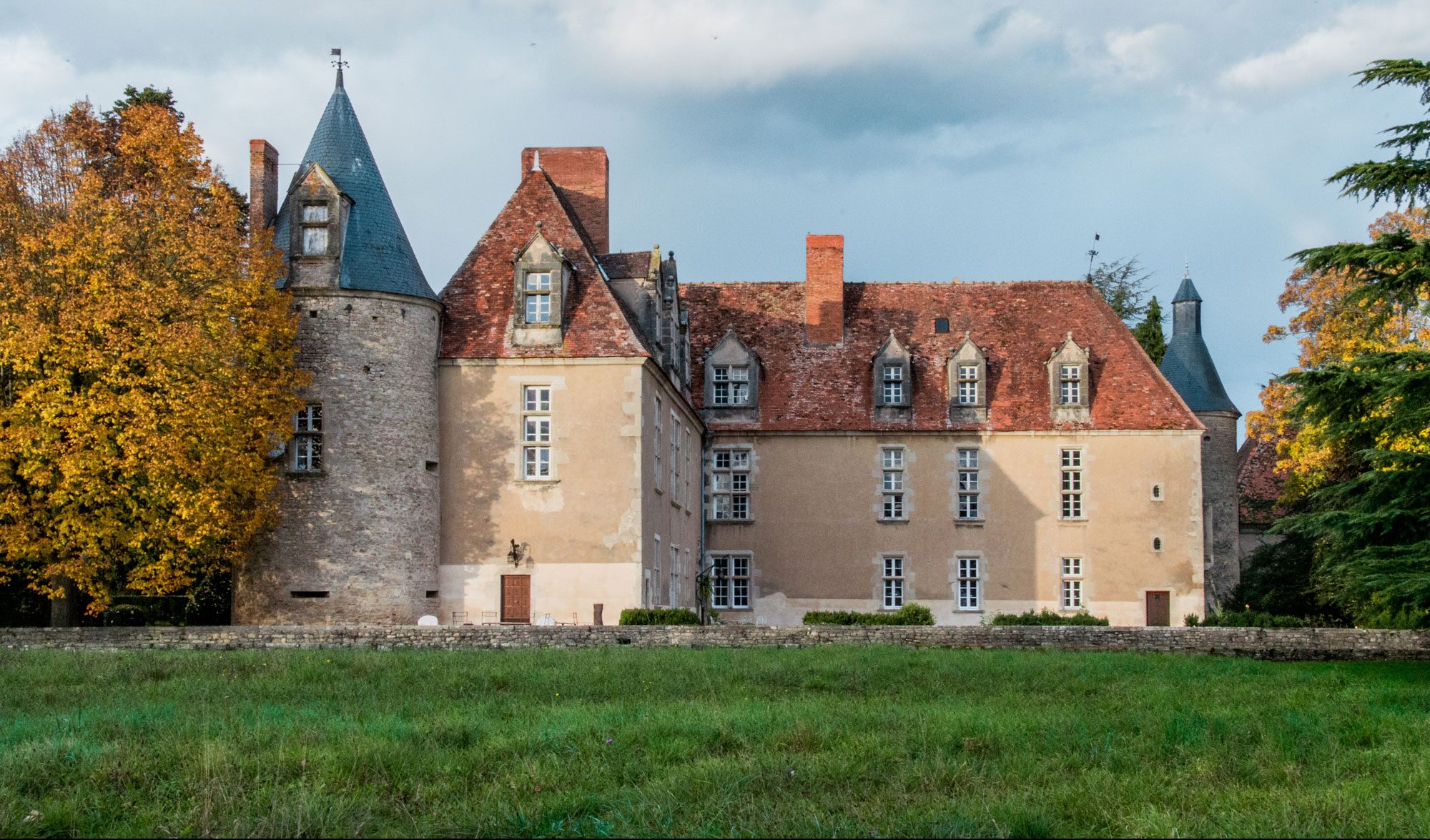 There is more come… Just down the road from the Château d’Effiat stands another gem in  the history of Auvergne : The gorgeous little Château de Denone, surrounded by a moat and charming gardens.
Built by Charles de Marillac in the mid-16th century, its history is intimately connected with Marschal d’Effiat, who purchased the castle in 1629 to accomodate his friend Cardinal Richelieu when he came to visit.
The room in which Richelieu stayed is open to visitors. With its Italianate painted ceilings and four-poster bed, this magnificent bedchamber shows you what life was like for the French nobility in the 17th century !

You will love the three Renaissance-style medieval towers of this château near Volvic an enjoy a stroll in the two formal gardens à la française.

In the 12th and 13th centuries, the hilltops in this part of France were awash with castles built to defend the seignorial estates.
To ensure they would afford effective protection, these castles were built with high towers, keeps and battlements.
The Château de Tournoël in Volvic is a fine example of all these features and gives you a good idea what it was once like to lord it over the land here. And it’s a great way to get to grips with the history of the warring noble families of Auvergne.

The castle’s vantage point, on a rocky spur at 594 metres altitude, treats you to a magnificent  panorama of the Limagne Plain and Monts du Forez mountains. 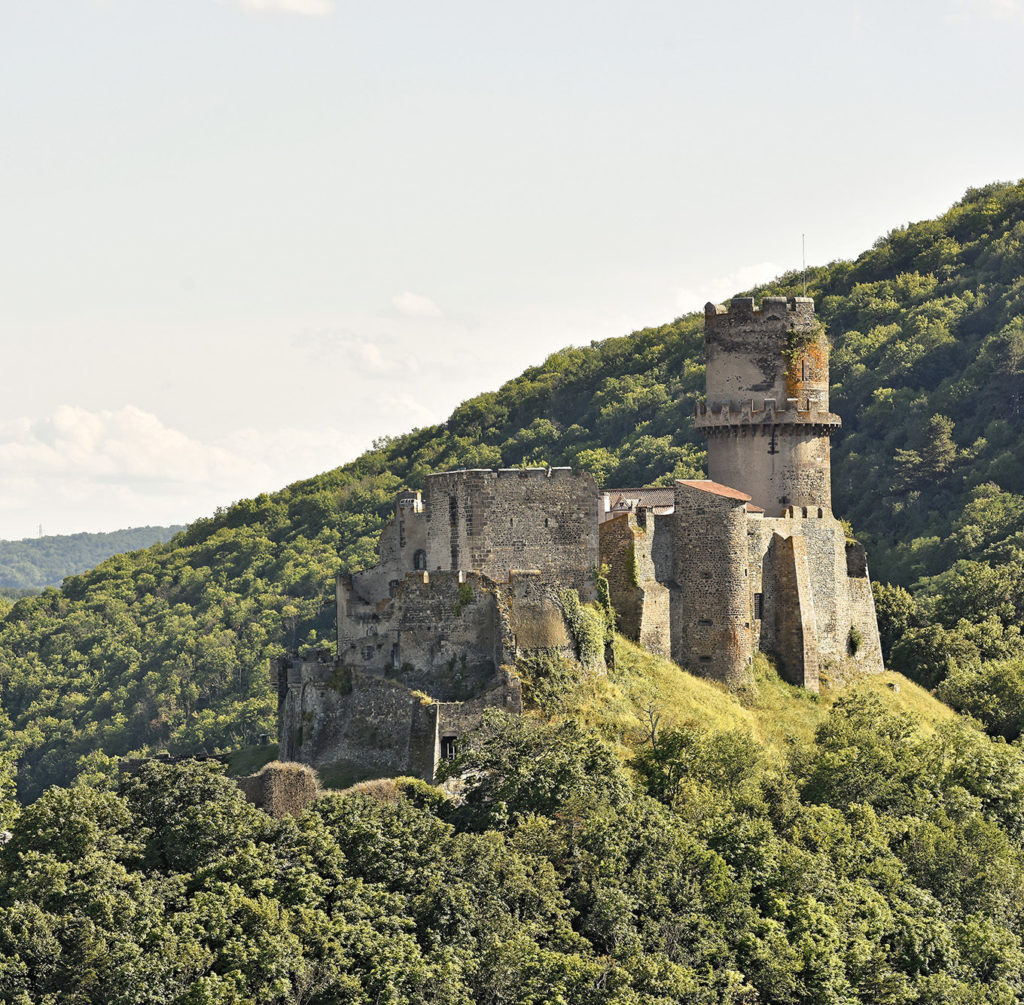 Being invited to join the castle owners at the Château de Tournoël was a terrific surprise ! When I saw the castle exterior, I did wonder what I was letting myself in for ! The owner showed me around enthusiastically, sparking my imagination with his captivating account packed with amazing and amusing anecdotes. But the best was yet to come : unique rooms (and one in particular, but It’s a secret) containing no end of magnificent objects that take you to a very different world !
There were secret passageways and the atmosphere was warm and welcoming (surprisingly for a castle). It was a sight to behold and a fabulous cultural experience.

I left utterly enchanted by my unique visit. And I would sincerely like to thank the Aguttes family and the Tourist Office. Without their help, I would never had the opportunity to experience this fine château, this incredible cabinet of curiosities.
It’s a must for all the family, with plenty to amaze bith children and adults ! Congratulations to the owners for restoring this unique place and preserving its heritage, a fine example of an achievement made with passion at every level.
Thank you to the owners for making ma feel so welcome.

In Terra Volcana, history buffs are in seventh heaven ! So many periods of history are represented here, there and everywhere, and always with the same promise : To whisk you back in time to make unforgettable cultural discoveries !

On the same topic
Castles

Top of the page

By continuing to browse this site, you agree to the use of cookies. Learn more